Mergers & acquisitions: How to manage growth with the right brand architecture strategy

SAB and AB InBev, Amazon and Whole Foods, Heinz and Kraft, AT&T and Time Warner, Microsoft and LinkedIn, and Bayer and Monsanto are all examples of M&As in recent years involving monoliths of industry, totalling R4.9-trillion.

In 2011, The Economist asked: “Do companies have to buy others to grow?” This was a pertinent question for the time, given that companies had lots of money and little direction on what to do with it. After the financial crisis, frugal spending by the private sector meant they had plenty of cash, leaving many executives with the question of what to spend it on.

Eight years later it seems that the question, though still relevant, needs to be rephrased. Something like “Do companies have to buy others to survive?” would do better given the consolidation of one of the world’s biggest tech firms, Amazon.

Amazon is known for growth via acquisition, which has put a number of businesses and industries under threat. In rumoured anticipation of Amazon going into the prescription drug game, pharmacy retail chain CVS purchased Aetna, a medical insurance company, in a merger worth R963-billion. Vertical integration is the new play by incumbents to fend off agile Silicon Valley firms, like Amazon, that have disrupted sleepy industries.

The Aetna-CVS merger isn’t the only example of companies trying to prevent themselves from being “Amazoned” – when firms are put out of business by the retail giant. Walmart has been on a spending spree, notably buying online retailer Jet.com for R13.9-billion in 2016.

As postulated byThe Economist, it seems that M&As have become less of an offensive play and more of a defensive one in today’s business environment.

Hire the architect before building the house

M&As are difficult. According to 2017 research released by KPMG, only about a third of M&As or takeovers add value to shareholders. Many companies struggle to integrate capabilities, cultures and brands. Clients and markets may also be confused by the new structure and how it would fundamentally change the business and its offering. Enter brand architecture.

Brand architecture is the deliberate and strategic design of the structure of a company that has numerous offerings or businesses. Virgin, for example, has multiple offerings under one brand: Virgin Atlantic, Virgin Mobile, Virgin Insurance and Virgin Active, to name a few. Telesure has taken a different approach. Auto & General, Hippo, Dialdirect and 1st for Women do not hold the same name as the “mother brand”.

There are various other approaches to brand architecture, but the one commonality is that there is always a strategic solution that is a best fit for the firm. Here’s a look at three broad ways to tackle the problem.

The three that be

Simply put, there are three overarching ways to construct your portfolio: branded house, hybrid, or house of brands. 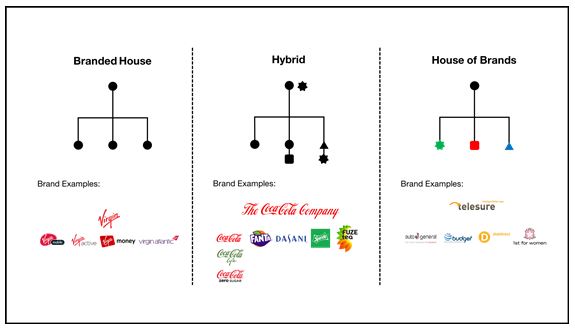 Branded house involves multiple entities that are all named after the “parent brand”, often called a monolithic brand. Hybrid includes a range of strategies within one portfolio. This often involves an endorsement or strategic association with a parent brand. A hybrid approach is often considered a “catch-all” approach where the structure doesn’t fit the other two. House of brands are independent brands within a portfolio.

Each of these three designs should be evaluated against the strategic needs of your business, notwithstanding the depth of your pockets.

As with any strategy trade-offs need to be made. In this case there is a trade-off between the level of investment behind the brand architecture strategy and the flexibility that each approach can give you. 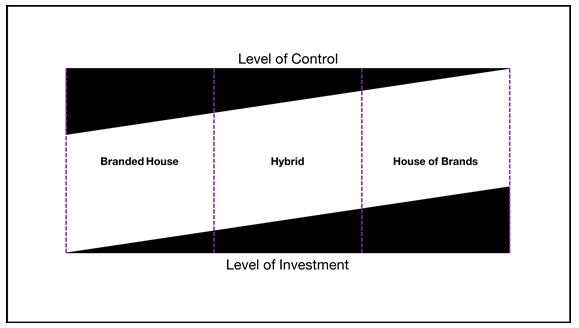 Typically a branded house would require the least level of marketing investment, as the acquired company would be absorbed into the parent company, resulting in the management of a single brand. In addition to this, all marketing efforts would build equity back into a single brand. However, this approach means that there is a lot of control that the one brand may have over another, which may in turn create a clash of cultures as one brand absorbs another. This is most often the case when a merger happens.

On the other hand, a house of brands would require significant investment as you would have to manage several different brands that don’t ladder up or build equity into anything but themselves. However, this approach does give you flexibility as you may not be bound by enforced brand guidelines from other brands in the organisation that has acquired you.